Don’t let this be you next year 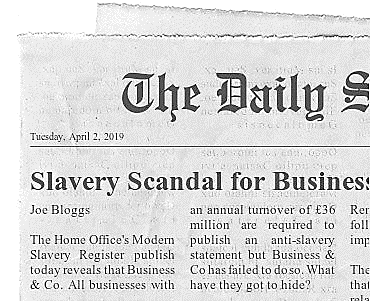 The Home Office is cracking down on businesses that have failed to publish a modern slavery statement on their websites, with the threat that they will be included in its ‘name and shame’ list and risk an unlimited fine. This list is to be published shortly after the deadline of 31 March 2019.

The Modern Slavery Act, which came into force 3 years ago, requires all companies with an annual turnover of more than £36 million, to publish an annual transparency statement setting out their approach to identifying and combatting slavery and human trafficking in their supply chains. Shockingly, the Global Slavery index estimated that in 2016 there were 136,000 victims of modern slavery in the UK and in the last year, 5,145 cases were reported in the UK; of which 41% involved children under 18 years old. However, one suspects that the vast majority of employers who fail to publish a modern slavery statement are not engaged in the exploitation of slaves – rather they will have merely failed to publish a statement.  This may be a distinction of little difference to the sensationalist headline writers in the local and national media who may well relish the opportunity to link an employer to a ‘Slavery Scandal’.

A recent government report states that the Home Office is in the process of writing to chief executives of 17,000 businesses to push for a slavery statement, and warn of the ‘slavery’ list. At Leathes Prior we have also become aware that Companies House would seem to be co-ordinating with the Home Office so that when accounts are filed that record a turnover in excess of £36 million, you can expect your website is being reviewed by investigators.  At risk are not only those who have not yet published a statement, but also those whose statement is outdated, or not detailed enough.

If the prospect of being ‘named and shamed’ is not enough to entice employers in to action, one has to also consider the commercial pressures that may be brought to bear.  Larger companies are starting to exert their own demands on their supply chains, where we have seen heavyweight businesses including M&S, Clarks, Co-op, Tesco, Marshalls and Ocado stating that in respect of Modern Slavery Act compliance it is “vital that businesses take action”[1]. These businesses, along with others such as Sainsbury’s, ASDA, Waitrose and BT have made it clear that they aim to work only with businesses that adhere to anti-slavery guidelines and we are seeing terms being regularly inserted into commercial contracts which allow a contract to be terminated prematurely if a supplier is found to be in breach of their obligations.   We can predict with certainty that when the ‘name and shame’ list is published next year, within days many of those in default will start losing vital business and contracts.

It is a reality that the pressures for transparency translate directly into monetary value as evidenced earlier this year when H&M stocks plummeted after slave labour allegations, drawing a close to H&M’s worst fiscal year since the year 2000, having suffered a 33% drop in revenue.   Whilst such a reaction may be understandable if one’s business is linked with genuine allegations of slave labour exploitation, businesses must not risk a similar consequence arising simply as a result of sensationalist (but legitimate) media reporting.

In short – is my business at risk and what can I do?

Businesses who operate independently or in a group structure in the UK with an annual turnover of 36 million or more.

To avoid being ‘named and shamed’ and risk an unlimited fine and to show that your business is making an effort to combat modern slavery.

Leathes Prior is experienced in advising clients on their Modern Slavery Act compliance and auditing obligations and drafting the statutory statements. If you would like to speak to our experienced lawyers about this, please ask our Employment Team on 01603 610911.