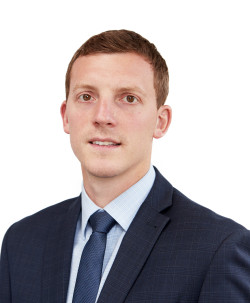 Stephen is a Senior Associate Solicitor in our Residential Property Team, offering clients specialist advice and assistance with a wide range of property matters.

Stephen graduated from the University of East Anglia with a 2:1 law degree before completing the Legal Practice Course in London, joining Leathes Prior as a Trainee Solicitor in 2012. His training involved acting for both private and commercial clients on contentious and non-contentious matters before he was admitted to the Roll of Solicitors on 1 October 2014. Stephen qualified as a Solicitor into the Residential Property Team in 2014 and since has been promoted to Associate in May 2017 and then to a Senior Associate at the firm in May 2019.

Stephen provides a high level of service to clients both domestically and commercially with a pragmatic and responsive approach. He is able to act on a wide range of property-related matters including conveyancing, re-finance, transfers of equity, drafting Declaration of Trusts, equity release, lease assignments, lease extensions and lease option agreements. With the growing demand for new build properties, Stephen has also built up specialist experience acting on the acquisition of small to medium size development sites together plot sales and purchases.

In addition, with the tax changes affecting the Buy to Let market (as covered in his article here) Stephen has gained a breadth of experience in attending to the complexities of purchasing property in a company name and acting on behalf of residential and commercial lenders.

Stephen is an active member of the local property network, most notably being a founding party of AAPC. He has also been a guest speaker at other local events, such as the Property Investor Network, where he addressed the topic of private lending; covering loan agreements and secured charges.

Outside of work Stephen enjoys spending time with his family, cooking and competing in triathlons including racing in two European Championships for Team GB.

I had an issue with the ownership of my property and a contact of mine suggested I contact Stephen Wilson at Leathes Prior. Stephen talked through my options and advised accordingly. He then actioned my instructions and was always quick to respond to my questions and the process was very smooth throughout. I would recommend Stephen and his team to anyone.

Just a quick thank you to confirm we got the keys on Friday and have started ripping up the carpets and getting the paint brushes out already. Found the whole process smooth and yourselves at Leathes Prior very helpful, efficient and easy to deal with. Thanks for your help with everything.

Your level of communication and immediate email response has been fantastic, your service first class. Your firm made this the smoothest house sale/purchase I have been involved in.

Dan and I truly want to thank you for your hard work and persistence in our first home buy. We have since recommended you to all of our friends as we found you incredibly prompt and professional, we want to say everything on our end went incredibly smoothly. We both wish you the very best and success for all your future. We will also continue to use you - as your service was first class.

I really appreciated your help and service during the time I was purchasing my new house and moving. It was a seriously busy period of my life...and you really helped. I would honestly say that your service and pro-activity blew me away, I have never been chased by a solicitor before for information – normally it is the converse!! I will take the time to highlight one of the many things that you did for me that I thought was outstanding. During the move one of your team phoned me for the bank details of my old mortgage so that could be paid off. I was at that stage helping my removals company (which were the opposite to you I may hasten to add – top dollar charges, despicable service) move boxes so I was extremely tied up. I put off looking for the information that your team wanted. A short while later the same team member phoned again and I apologised as I hadn’t got the information to them, they said don’t worry, we have located the information and have paid the mortgage off for you!!! Fantastic service.

Many thanks for all your help, we were very pleased with the service we received from you and all at Leathes Prior, we would not hesitate to use your services again in the future.

I would like to take this opportunity, on behalf of the Trustees, to thank you for all your help. I would certainly recommend Leathes Prior to others, not least for the efficiency and quick responses to queries.

We just wanted to say a massive thank you to your and your team for getting everything sorted and for persevering and having to deal with RCC! Thank you doesn't really come close. I wouldn't use anyone else to move now (sorry you're stuck with us!)

May I just thank Alex Reading and Stephen Wilson for all your help getting the sale completed as quickly and smoothly as you have done. The service has been first class and it’s been hugely appreciated.

Thank you for all your hard work on this, I will definitely recommend you to friends and family in the future.

Thank you for all of your help I really appreciate it. You have made the whole process of my flat and this sale go through so smoothly and stress free. I will definitely recommend your services in the future.

We were so impressed by the way you dealt with the sale. You made what could have been a very difficult time a great deal easier by your prompt reaction to both me and the buyers' solicitors, and by being easily available on the phone and by email. We should be very happy to ask you to do the conveyancing on the purchase of our next house and will be in touch.

I just wanted to let you know how impressed I have been with Stephen Wilson, one of your Senior Associates. He dealt with my case swiftly and confidently and showed a great understanding of the whole process. He put me at ease with an incredibly important situation and I would recommend his services to others.

Just wanted to send a quick email to say thank you for all your help. Thankfully the re-mortgage went through seamlessly and no further hiccups along the way. I know we use yourselves (as a company) as our solicitor, but I would personally use your services again if required. You were very efficient, friendly and knowledgeable & above all, helped in my hour of need. Many Thanks again!

Thanks for all your help Stephen, we really appreciate how easy you have made this for us and will definitely use you again next time we move, (few years yet though) we have already recommended you to others and will continue to do so.

Absolutely ‘A1’ support from yourself and your colleagues. I will certainly recommend Leathes Prior to others.

I would like to thank you for your diligence (I know that I can be very impatient but our life has been so unsettled that it had to come to an end rather sooner than later). Many thanks for the way you have conducted our business all the way.