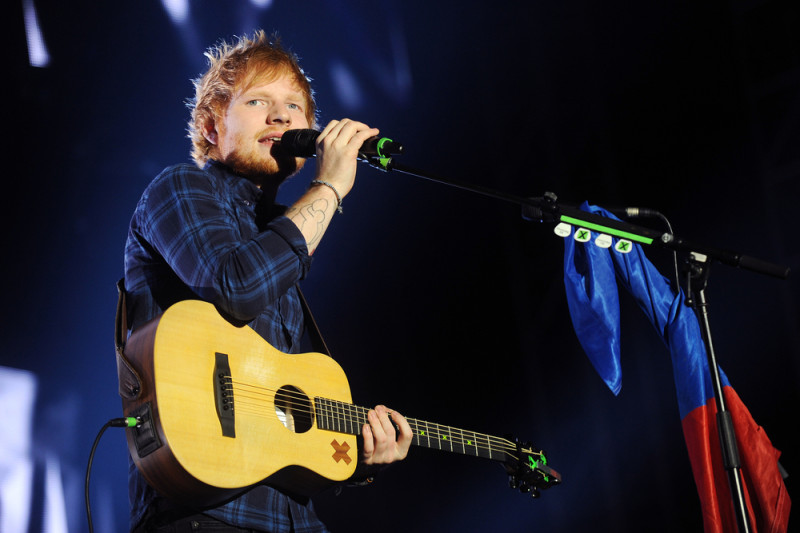 Earlier this afternoon (08 March 2022) Ed Sheeran swapped the Pyramid Stage for the witness stand as he gave evidence for a second day in a copyright trial over a riff in his single Shape Of You. However, the change of setting didn’t prevent the Suffolk artist singing a few bars for the Court, serenading London’s High Court with elements from songs by Nina Simone and Blackstreet in a bid to prove he had not lifted ideas from the work of another artist, Sami Chokri.

Sami Chokri (who performs under the name Sami Switch) and co-writer Ross O’Donoghue brought a claim for copyright infringement against Sheeran in 2018.  As a result, Sheeran’s royalties for Shape Of You, an estimated £20 million, have been frozen until the claim is resolved.

Sheeran created Shape Of You with co-writers Steve Mac and Johnny McDaid, both of whom appeared in Court with the artist. The song was released in 2017 and became the best selling song of the year, internationally.

Chokri and O’Donoghue claim that the hook ‘Oh I’ in Shape Of You is ‘strikingly similar’ to part of their own track titled “Oh Why”, released under the name of Sami Switch in 2015.  Sheeran denies he lifted the melody from Oh Why and, instead, described his creative process by singing other famous hooks to illustrate how commonplace the melody is in pop music.

In very broad terms, copyright protection arises automatically when you create and record (in writing or otherwise) a “work” to which copyright (a type of intellectual property) applies. Unlike other types of intellectual property (e.g. trade marks and patents), registration is not required in order to protect your work and there is not a register of copyright works in the UK. A copyright gives the owner the exclusive right to copy and distribute a creative work (e.g. original literary, dramatic, musical and artistic works) for a limited time. Copyright infringement occurs when a copyrighted work is reproduced, distributed, performed, publicly displayed, or made into a derivative work without the permission of the copyright owner.

The above case follows other high-profile cases in recent years, notably a claim by the estate of Marvin Gaye against Robin Thicke relating to his much maligned single “Blurred Lines”. Each such case turns on its own facts, and whether Chokri and O’Donoghue will be able to show that Sheeran’s “Oh I” was copied from their “Oh Why” remains to be heard.

No doubt Sheeran was not the first witness to “sing” (whether literally or figuratively) in the witness box, but given his footballing affiliation he would certainly resist the allegation that he had “sung like a canary”.

If you have a copyright or intellectual property issue please contact our Litigation and Dispute Resolution Team.  Telephone 01603 610911.  Email info@leathesprior.co.uk.