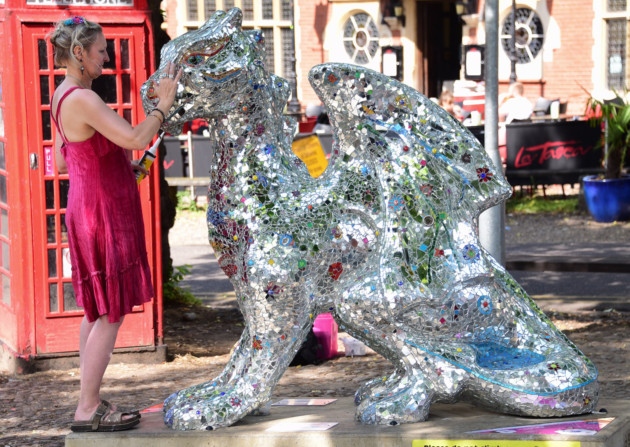 Leathes Prior is absolutely delighted as their GoGoDragon fetches the highest bid at the GoGoDragons auction.

Over 500 people attended the auction, which took place at the Forum from 6.00pm on 1st October, marking the end of the GoGoDragon charity trail. In total, bidders raised £369,500 for the children’s charity, exceeding the amount raised from the GoGoGorilla trail which raised £272,300 in 2013. Leathes Prior sponsored a dragon as part of their support of Break as their chosen charity of the year. The firm held a competition to allow staff’s family members to submit design ideas for the dragon and ten year old Evelyn Scott’s sparkly polka dot design was selected to use as inspiration. The Marketing Team at Leathes Prior were also inspired by the Spanish architect Gaudi and set about compiling design ideas for a mosaic dragon.

Break then worked with Leathes Prior to find a local mosaic artist to decorate the dragon and bring their design ideas to life. The team couldn’t have been more delighted when the talented Carolyn Ash of Mosaic Memories in Castle Acre agreed to take on the project. Carolyn had several meetings with the Marketing Team at Leathes Prior towards the end of 2014 to pull design ideas together and work began in January 2015. Carolyn then put an incredible amount of work and time into the decoration of the dragon and far exceeded the expectations of the firm. ‘GoGoMosaic’, as the dragon was aptly named, was decorated using a surprising variety of materials; mostly recycled from the local community. Part of the decoration included broken pieces of mirror, brooches, jewellery, cutlery, crockery, house signs and commemorative pieces.

Throughout the trail GoGoMosaic attracted lots of attention in Tombland, nearby Leathes Prior’s offices, and made the final of the EDP ‘favourite dragon’ vote. Leathes Prior could not be more delighted that their involvement in the project has contributed to such a generous donation of £25,000 in order to take GoGoMosaic home. Whilst the dragon will be sorely missed, both by all at Leathes Prior and by Carolyn, the firm couldn’t be happier that such a large amount of money will be going to a local charity that transforms the lives of vulnerable children, young people and families in the area.

Charlotte Disney, Business Development and Marketing Manager at Leathes Prior says “Both Carolyn and myself were in a slight state of shock as the bids were increasing at the auction; we are so delighted. I don’t think I will be the only one that feels very sad to say goodbye to the dragons, especially GoGoMosaic, but I’m thrilled that Break have been able to raise so much money for an excellent cause and that Carolyn’s hard work will get some deserved recognition”.

For more information about the auction evening see here .